Last Saturday I got to spend the day at All Star Comics Melbourne as part of their All Star Artists Assembly. It was an impromptu do to coincide with the OzComicCon weekend, so I really wasn’t at all prepared for it but I thought I’d give it a shot and try selling a few more of my Catwoman zines and other prints.

We drew free sketches for anyone who asked, which was a bit daunting for me as I’d not done this before and was slightly worried about the kinds of requests I’d get (!). I worried for naught as I got to draw cool people like Agent Carter, and various versions of Catwoman, and other female characters in comics. It was so much fun chatting with like-minded comic fans and discussing the things we love and care deeply about. One young woman enthusiastically described how she overcame her social anxiety to come out and support me and female representation in media. I was really touched. It’s humbling to know the work one creates can leave a positive impact on people. 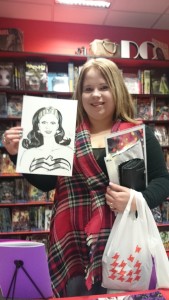 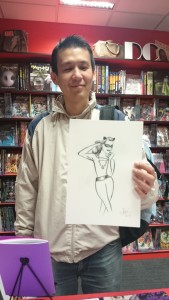 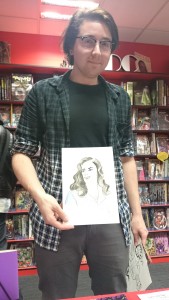 Thank you to everyone who bought my work and asked for a sketch yesterday at @ascmelbourne. It was a lot of fun. Many thanks to the All Star team too for organising this event 😁

Am in front of the DC trade paperback section at @ascmelbourne. Appropriate. Also, I love my tip jar!

My friend Andy was nearby at his own table and I sat alongside some other interesting neighbours and made new friends too. It was in all a rewarding and fun day. I even sold a few things, which continues to surprise me! (So then I rewarded myself by buying more comics … as you do.) My only regret was not giving myself time to visit the other artists, but hopefully there’ll be future opportunities.

Thank you so much to the All Star team for their generosity and support in arranging this event. Is it any wonder they won an Eisner Award? They really care about the customer experience. Much love.

This entry was posted in Conventions, Geekery and tagged catwoman, comics, melbourne, zines. Bookmark the permalink. Posted on 3 July 2015